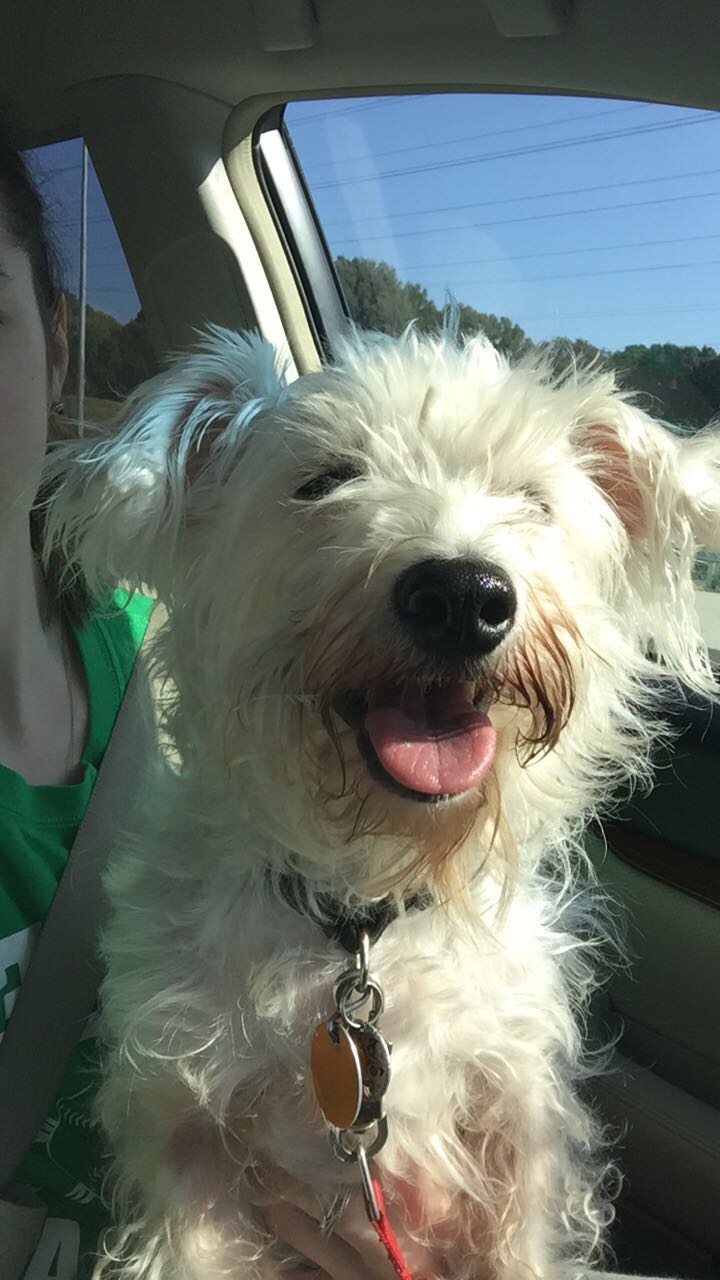 We have, either by happenstance, fate or grace, a little character (hard to call her a dog) who we named Maci.  Maci is believed to be 4 or 5 years old, and a mix of West Highland Terrier and some other breed that added spunk and spirit.  The result was a face not even Hollywood could have created, had they asked central casting for “adorable”.  Surely, for most of those years she had another family.  I choose to believe Maci was happy with her other family and cherished her time with them.  But then one day her world was changed terribly by circumstances that seem impossible to imagine, such that she had her family no longer.

Maci not only lost her family, but by the cruelest of fates, Maci’s family gave her up to the sure likelihood that she would be destroyed, unless good fortune allowed her to be rescued from such an end.  On that day, as I now know Maci, I am sure she went happily with her family on what she imagined to be just another wonderful time of togetherness, a car ride, and some adventure she trusted.  But the adventure soon became betrayal and horror for her.

Maci was dropped off at a “destroying facility”, by a family who could no longer allow time, love and survival to Maci.  They had circumstances which sucked the love from all they had shared with Maci, and instead, placed her where sheer chance now controlled whether Maci would ever know happiness again, or whether she would even survive past the mandatory 7 days allowed by her “facility”.

I don’t know what thoughts Maci had as her family handed her over to the staff of her facility and walked out of sight.  But I now know Maci well enough to know that she fully trusted their departure to be only temporary.  You see, Maci loves with all her heart.  She is so loving she never learned even typical defense of her space, or how to respond when another dog growls or attacks her.  She only knows how to wag her tail and humbly give up any challenge or even self-defense.  So, to be sure, Maci, fully expected her family to love her similarly, and certainly to never dessert her.

Maci’s loving heart and disposition were soon so disappointed that she lost a large patch of fur on her back, later described to me by a veterinarian to be caused by nothing other than sheer terror…”trauma patch”, the vet called it.  I don’t know fully how Maci spent her time at this facility, but I know Maci well enough to know she was hopeful each day that her family would return for her.  I know that every time someone showed up to claim another dog, Maci expected it to be her family.  And every time she was disappointed, her trauma only intensified.  Not so much because she was in a gray cold pen with other animals, but because Maci needs to love someone or some other buddy all the time.

On Maci’s seventh and last allowed day before being destroyed, my daughter Molly decided to go to this facility “just to take a look”.   Soon she was sending pictures of Maci, and Maci was ours, cute face and bare skin back.  But even more surely, we were Maci’s.

As I said, Maci loves with all her heart.  So you cannot even imagine how quickly she was consumed with love for Molly.  We have had Mace-Dog for 5 months now, and she still cannot bear for Molly to be out of her sight.  She follows Molly with her stare as she gets out of the car to go to school.  She has jumped out of the car window and chased after Molly all the way into Kroger.  Once when Molly had to leave her with me in the back yard, and leave in a car with someone, Maci crawled under the fence and beat the car to the next stop sign.